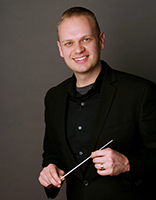 Dr. Kyle Zeuch was appointed the director of the Harrisburg Choral Society in 2019.

Dr. Zeuch graduated from Capital University in Columbus, OH, earning a Bachelor of Music in Music Education in 2007, and earned a Master of Music in Choral Conducting in 2013 and a Doctorate of Musical Arts in Choral Conducting in 2017 from Michigan State University in Lansing, MI. While at Capital University he co-founded the Capital Chordsmen Men's Chorus in 2004 that is still active on campus.

Previously he served as Choir Director at Rivera High School in Brownsville, Texas and as Director of Children and Youth Choirs at Michigan State University.  Under his direction, Dr. Zeuch’s choirs have performed at state conferences, throughout Europe, and on the stage of Carnegie Hall. He maintains an active professional schedule presenting, guest conducting, and adjudicating both regionally and nationally. His professional association affiliations include the National Association for Music Education, Pennsylvania Music Education Association, and the American Choral Directors Association.  He has also served as music director for Grand Ledge First UMC in Grand Ledge, MI, and Covenant UMC in Lancaster, PA.

In 2018 Dr. Zeuch was appointed Assistant Professor of Music at Lebanon Valley College in Annville, PA, where he conducts the choirs and teaches courses in music education and choral conducting.  He also serves as a clinician, lecturer, adjudicator, and guest conductor throughout the region.