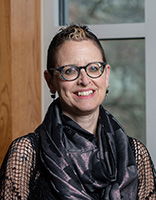 Lister's performances have taken her in and out of the U.S. She received a prestigious Arnold Grant from LVC and has travelled to Asunción, Paraguay three times. While there, she performed with the Orquesta del Congreso Nacional, taught lessons at the Conservatorio Nacional de Música and Universidad Nacional de Asunción, gave masterclasses, and supervised two different student pedagogy projects. She has collaborated numerous times with internationally-known guitarist and Latin Grammy winner, Berta Rojas.

Lister earned her undergraduate degree in music education from James Madison University and her master’s and doctorate in performance from the Florida State University.