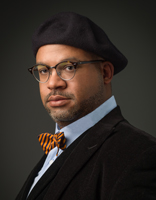 Baritone James Martin has won critical acclaim for his performances in opera, musical theater, and concert as a versatile singer, actor, and entertainer. Always an audience favorite, his artistic repertoire spans from Bach to be-bop, Busoni to Burleigh, and Berg to Bernstein. He has appeared with leading musical organizations throughout the United States and abroad, most recently he toured Taiwan and Thailand with frequent collaborator Lynn Raley.

Martin holds a Bachelor of Music degree from Illinois Wesleyan University and his Master of Music from the Juilliard School, and multiple award recipient. He was a Young Artist with the Juilliard Opera Center, and apprenticed with major young artist programs in the U.S. and with L’Opéra National du Rhin in Strasbourg, France, as one of seven international Les jeunes voix du Rhin. He studied voice with David Nott (IWU), Cynthia Hoffmann (Juilliard) and Benita Valente.

In addition to a successful performance career Mr. Martin is an accomplished teaching artist and arts advocate touring classrooms and educational performance venues across the United States, Europe, and Asia. He has served on the boards of Grace House, a non-profit for homeless people living with HIV/AIDS and the Mississippi Academy of Ancient Music (M’AAM). James Martin can be heard on the Copland House Blend, Naxos and Albany record labels. Upcoming performances include recitals in NY, MS, AL, IL, IA and PA as well as Beethoven's 9th Symphony and the mid-western premiere of Kirke Meachum's La Befana

"And opera buffs should watch for James Martin, a baritone with a big, beautiful easy rolling voice. Mr. Martin also tap-dances, as he showed in "Mo 'Lasses," by Charles Roberts; the program cited a 'tap-dancing Papageno.' Bring it on." -Anne Midgette, NY Times

"The versatile...brilliantly talented...Martin may be the only baritone who sings Falstaff, Figaro, Don Giovanni, and would also be at home in a production of Ain't Misbehavin'." -Alan Gomberg, Talkin' Broadway.com

“The final artist to appear was James Martin, baritone, who sang with solid support and a sweet voice which had the virtue of seeming natural and wholly unaffected. (It is a true testament to artifice, high mastery of artistic training, that it effaces itself and seems natural.)” -Cashman Kerr Prince, The Boston Musical Intelligencer