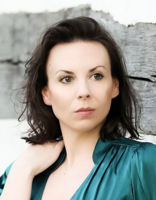 As a noted ‘triple threat’, Ms. Boudreaux has enjoyed performing with a range of notable organizations. One of only 6 soloists chosen to participate in Prima Theatre’s masterclass showcase with Stephen Schwartz, Ms. Boudreaux is nothing if not versatile. At the historic and professional Shawnee Playhouse, she debuted as Laurey (Oklahoma!), returned as Mabel in Pirates of Penzance, and starred as Adelaide in Guys and Dolls in 2019. She premiered new work at New York’s International Fringe Festival, and created and performed an original cabaret, titled Girls on the Edge with Broadway music director, Charity Wicks to audiences in both Manhattan and the Lehigh Valley. Always an advocate for new work, Ms. Boudreaux was delighted to perform the lead role of Kim in Center for Contemporary Opera’s production of Eric Salzman’s futuristic piece, Big Jim and the Small Time Investors. A favorite debut was with St. Petersburg Opera as Anybodys in West Side Story (performing “Somewhere” and as dance captain), where she returned to play Frasquita in Carmen the following season. An accomplished symphonic soloist, Ms. Boudreaux recently performed with the Missouri Symphony (Mozart’s Requiem) and Astoria Symphony Orchestra (Knoxville: Summer of 1915) and regularly appears as a soloist with the Harrisburg Choral Society. Other highlights include performances with New York's Verdi Square Festival (where she “won deserved ovations” according to Anthony Tommasini of the New York Times), Asheville Lyric Opera (Pamina in Die Zauberflöte and Liesl in The Sound of Music), American Opera Projects and the role of L'Innocente in a concert performance of L'Arlesiana with the Opera Orchestra of New York under Eve Queler at Carnegie Hall.

Ms. Boudreaux runs a small, successful private performing arts studio in Easton, PA where she coaches performers in voice, acting, or dance. The artistic director and co-founder of the professional non-profit, American Monarch Theatre Company, she is passionate about theatre that makes an impact in her local community. When not judging dance competitions on the road, she directs and choreographs high schoolers in the area, leading them in award-winning productions. Always working to make a difference, Ms. Boudreaux is proud to be casting director and artistic manager for the national educational production company known for its shows on alcohol education and sexual harassment (Maximize Your Buzz/ Zero Shades of Gray, Collegiate Empowerment.